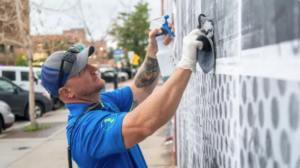 It is a little before 11 a.m. on a Tuesday. BJ Zuromski crouches on the Pearl Street Mall, talking to one of his friends. The man, seated in a wheelchair, is having a bad day, struggling with sobriety and the challenges of living on the streets of Boulder. He tells Zuromski that he wants to die.

Nine hundred and thirty-seven days sober himself, Zuromski shares a bit of his story with the man he sees nearly every day. He urges the man to hang in there, and promises to check in later, after he finishes up work elsewhere on the mall.

Zuromski is one of Downtown Boulder’s blue-shirted ambassadors. The program — a partnership with national organization Block by Block, which works with 100-plus cities, business and arts districts across the U.S. — began last year as part of Boulder’s  $2.8 million plan to manage and remove unhoused people in the city; primarily in downtown, where there is often conflict with business owners, shoppers, residents and workers.

In a package of not-yet-successful initiatives, the ambassadors stand as a shining example of national best practices in the value of personal, non-police interactions with people experiencing homelessness. Business owners have sung their praises, and Downtown Boulder Partnership and the Department of Community Vitality will be asking for money in next year’s budget to continue the pilot.

“When the ambassadors start, I tell them the mission is to be the best part of someone’s day,” said Chip, CEO of Downtown Boulder Partnership. “Downtown works well when it has that social infrastructure, and it’s not just people coming and going, but it is a community.”

‘They really do care’

A polo-shirt-clad crew of 17 walk Boulder’s downtown and University Hill business districts through the summer; the team is smaller in the winter. They are responsible for all that is needed to keep the areas safe, clean and welcoming: picking up trash, removing graffiti, responding to business concerns and answering questions for the tourists. Chip calls them the “Swiss Army knife of downtown management.”

The feedback from businesses, visitors and members of the public has been good so far, Chip said. A formal survey is planned next month. Employees and owners visited by Boulder Beat gave glowing reviews of ambassadors they often know by name, who walk them to their cars at night, check in daily and respond quickly when called.

Their hospitality extends beyond their jobs; one ambassador, Denver, organized the others to bring flowers to one business owner on her birthday. Zuromski frequently purchases coffee or food for his friends experiencing homelessness who spend time on the mall; once, bought a walker to replace a broken one for a man with mobility challenges.

“They really do care,” said, Ellen Epstein, from family-owned Pearl Convenience (1640). “Someone stops in here every day. When someone new starts, they will come introduce them to us. They’ve become our friends.”

Most often, workers and business owners referenced the ambassadors work with people experiencing homelessness. Before the ambassadors, the only option for outside intervention was the police. Historic harm and distrust — on top of trauma — means situations often escalate into an arrest or mental health hold. A friendly request from a familiar ambassador can create better responses.

“People will comply, move along, ask for a bag so they can clean up after themselves,” Zuromski said. When someone is yelling or causing a disturbance, “we take people for a walk, ask them what’s going on,” said Brandon Lowe, operations manager. “Nine times out of 10, it’s someone having a bad day” and the gentle intervention helps.

It all comes down to relationship building, Chip said, which is “not something we invented. This is best practice.”

“Relationships build trust. A couple of guys this morning were by the Wells Fargo parking lot, take out a bowl and start smoking pot. I know who they are. I said, ‘Hey do you guys mind going back there?’ They’re like, ‘Oh yeah, kids are here. No problem, Chip.’ It wasn’t punitive for them. I’m not a cop going, ‘I’m gonna write you a ticket.’ It was like, ‘Hey, look around, you’re part of this, and your part would be cooler if you’re down there.’

“They’re still going to smoke pot down here, but they’re going to be a little more conscious about the part they’re playing.”

Ambassadors still do call the cops on occasion; each ambassador has a story about a situation that was beyond their skillset. But they also share an understanding of why it is a tool to be used sparingly and a genuine concern for the wellbeing of people they think of as friends.

“The last thing we want them to think is we’re security or authority,” Zuromski said.

At a recent outreach event at the Boulder bandshell, unhoused residents reported both positive and negative interactions. They said the ambassadors were similar to the cops in one way: Some are nice and others hassle them. Ambassador team members gave similar feedback, noting that not every one of their peers shows Zuromski’s skill and sensitivity.

Still, the program has proved popular enough that Downtown Boulder Partnership is asking for enough money in the upcoming budget cycle to extend it past the 18-month pilot period (which ends roughly with the calendar year). So far, the city has spent $586,000 on the ambassadors, with Downtown Boulder kicking in an additional $343,902.

The ask for 2023 is $500,000, which will add University Hill-specific ambassadors and two outreach workers to help unhoused residents downtown and on the Hill. Trained professionals can go beyond what ambassadors are capable of, Chip said.

“Do you know what’s BJ’s training is for dealing with suicidal people? None,” said Chip. “Having dedicated staff who are trauma-informed and understand what services and resources are (available) — our team doesn’t know that, and they don’t have time to know that.”

Block by Block provides social service outreach in several cities, and employs an outreach program manager. Chico Lockhart said outreach workers are trained more extensively in de-escalation and engagement than ambassadors, though “we are training ambassadors in those things more and more” amid a worsening homelessness crisis.

“A lot more downtowns are looking into outreach,” Lockhart said. It has become best practice to have “one or two outreach workers on call in business districts, 40 hours a week.

While it’s not a “one-size-fits all recommendation, … prioritizing outreach coverage in the areas that have the highest presence of unsheltered neighbors” is typical in most communities, according to Lauren Barnes of Built for Zero, a national organization that provides a framework for measurably reduce homelessness.

“If that is part of a particular downtown area/district, then that’s where outreach activities would be concentrated,” Barnes wrote in response to emailed questions. “Dedicated outreach teams in downtown areas working in coordination with businesses, emergency responders and other community members are an important practice to engaging and housing people experiencing homelessness.”

Boulder has struggled to provide adequate outreach, instead relying on community nonprofits. A team was established in late 2020 but saw turnover almost immediately. “In 2021, the BTHERE program was inconsistent in both staffing and outreach,” staff noted in a recent update to city council.

Boulder Shelter for the Homeless took over the outreach contract, and a new team will be operational soon. The shelter’s interim director, Spencer Downing, said the plan is to engage with individuals who are otherwise disconnected from the system and services. 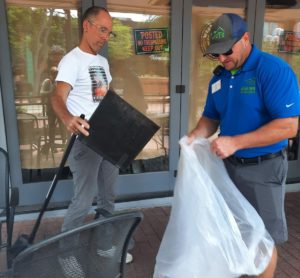 “We are hopeful that BTHERE will be reaching out to individuals who are not otherwise connected to services and may possibly not be on lists or other instruments that ends up getting into housing,” Downing said in a February interview. “For the shelter, housing remains a paramount interest. We are not charging the team with the goal of getting people into the shelter (and we) are very, very interested in making sure whatever BTHERE does is not duplicating what is already going on.”

Given the recently revamped outreach team, city officials may be reluctant to approve a request for downtown-specific services.

“It’s not a no,” said Cris Jones, director of Community Vitality, but the department might first like to rely on “existing resources” to fill the need for outreach downtown. That could include fully staffing up other teams that are part of the encampment removal strategy, such as Urban Park Rangers and the police department’s dedicated “encampment cleanup” team and Homeless Outreach Team.

That’s why Community Vitality is asking for only a year of funding, Jones said, rather than an ongoing budget item. That will give the city enough time to see if and how the fully implemented strategy works.

“We want to make sure the ambassadors are supported,” Jones said.

Mayor Aaron Brockett echoed Jones, saying that adding outreach workers downtown is “a fantastic idea” but that they may be budgeted for another program, such as a non-police response team the city is considering.

“The ambassadors have been doing a really good job at their wide variety of functions,” Brockett said. “Having outreach workers who are specifically trained for that and can help connect folks to services or assist them with a problem they’re having, it’s better for those folks who are assisted.”

For now, Zuromski and the other ambassadors will continue to do what they can. For the gentleman he talked to that sunny Tuesday, Zuromski planned to visit him once more that day, then stop by the next morning, maybe with a cup of coffee.

“I can’t take him anywhere. I can’t do anything,” Zuromski said. “All I can do is hope for a better tomorrow for him.”

Author’s note: This article has been updated to reflect the number of groups Block by Block works with.