News / DOWNTOWN K-TOWN CONNECT AMBASSADORS: WHAT DO THEY DO?

DOWNTOWN K-TOWN CONNECT AMBASSADORS: WHAT DO THEY DO? 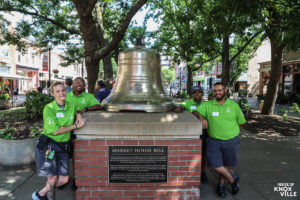 Orignal article published by Inside of Knoxville

Since the program was announced last April, the ambassadors employed in the K-Town Connect program have been daily working their way around downtown. You might spot them in their bright neon-green shirts. The program launched almost three months ago as a joint effort by Visit Knoxville, the City of Knoxville, Knox County, and the Downtown Knoxville Alliance, is a product of the Block by Block company, which provides services to 100 locations according to their website.

I’ve introduced myself to several of the ambassadors and I’d encourage you to do the same if you spot them. I’ve seen them engaging homeless people, picking up trash, and greeting visitors. I wanted to know a bit more about what they are doing and how the effort is going, so I had separate conversations with Kim Bumpas, President of Visit Knoxville, and Narell Haigler, the downtown coordinator for the group to get their perspectives.

Ms. Bumpas said the program is going well. She said she didn’t really know what to expect when the program launched and Visit Knoxville was asked to take on management. She said she has been pleasantly surprised. “Those that have been hired are very caring, extremely smart, trained in social services . . . the compassion that they show and the way they’ve been able to engage with the homeless population has been quite impressive.”

There are six ambassadors, including Mr. Haigler, who are out on the street daily, with at least some part of that group out seven days a week. Knoxville groups have purchased a number of hours for the year and there is flexibility within that number of hours, depending on special events, for example.

She said they have been able to learn more about downtown to share that information with visitors. She said a number of times when tourists enter the Visitor Center they have reported that they were directed there by the ambassadors. They also have connected to city services to report graffiti. She said they have been removing stickers that a group recently put up around downtown, saving time for city workers. And they have been forming beneficial relationships with the homeless downtown. 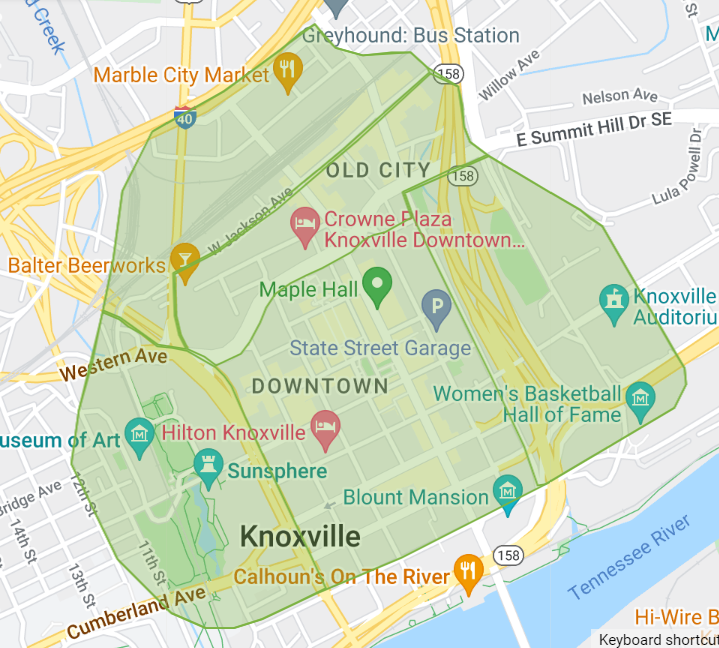 One incident stood out in her mind involving a tourist who crashed their bike and needed to be transported to the emergency room. The K-Town Connect person was the first on the scene and helped make that happen. In another situation a K-Town Connect person was able to sit with a homeless person who was irrational and bring them back enough to learn what services they needed and to connect them to those.

A main emphasis in the early stages of the program is to collect data. That data will be published by Visit Knoxville quarterly and will not only show what the ambassadors have done, but it will help identify the biggest problems or needs and where they might have the most impact.

The ambassadors work from 7:00 am to 3:00 pm each day and divide into zones that cover downtown and adjacent areas. She said it may expand beyond those parameters either with more hours, more workers, or more territory in the second year. They will know more about needs after the first contract year. She said the system was “never intended to operate twenty-four hours a day.” She made it clear as well that they are not law enforcement, but rather try to impact the downtown area in a range of other ways.

She also said they’ve had an impact on the interactions that Visit Knoxville has with the homeless population. She said they routinely enter the Visitor Center and now she said they are less often agitated and difficult. She said the tone has changed because someone in the building likely knows their name and knows a little about them. She said, “Maybe some of the people who we have incidents with act that way because they don’t feel seen and K-Town Connect is making them feel seen and maybe there is hope . . .”

For more detail about day-to-day operations, I spoke with Narell Haigler. Given that it was during the shift, he asked if I would walk along on his route so that he could give it the coverage it needed. We walked from the Visitor Center to the Bijou via Market Street and back through Krutch Park while we talked.

Narell is from Clinton and has always lived in East Tennessee. He was a program manager at Open Arms and he current serves in the Army Reserves. He was interested in serving other people in a new setting. He enjoys both the outreach and the welcoming portions of the job. “I love Knoxville and it has been a great journey.” 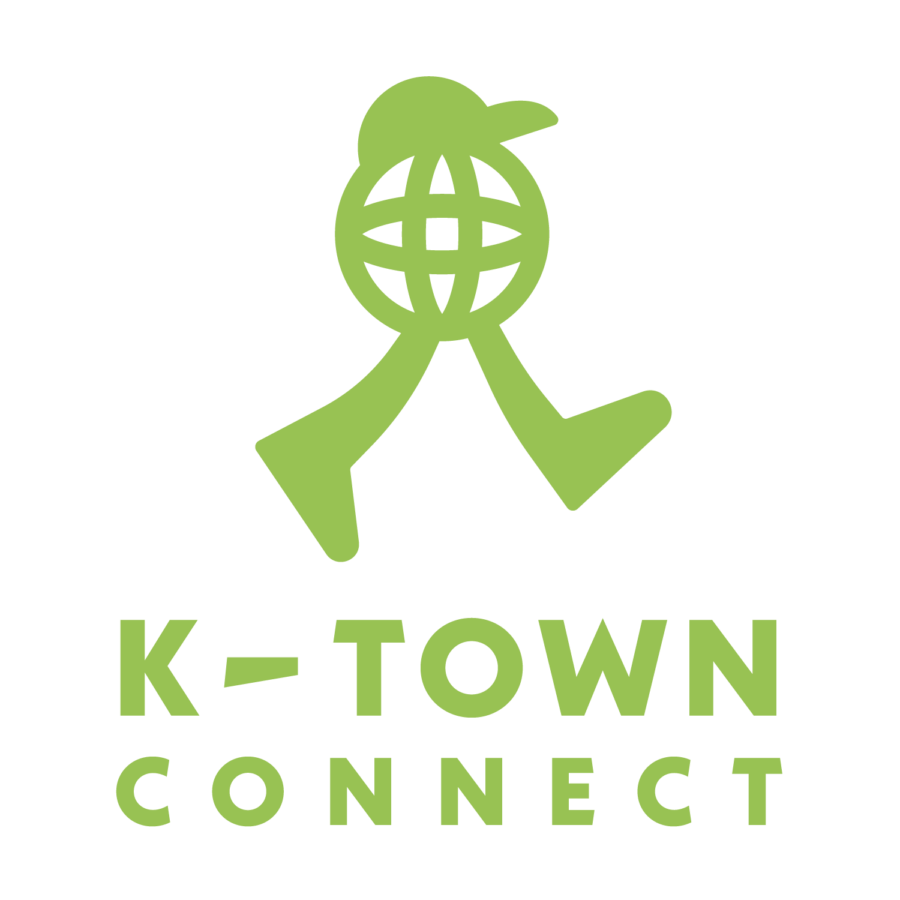 He said the public, from visitors, to the homeless population, and business owners have quickly embraced their role. He said they may give directions to the Dolly Parton mural, help a homeless person get services, and then be asked by a business owner to check a nearby alley. “It has been a challenge, but I feel we’ve been helpful.”

They begin the day with a shift briefing at 7:00 am to tell them what is happening in the district, from the Farmers’ Market to the U.S. Cycling Championships. They talk about who is likely to be downtown and they discuss outreach. He said they often know that a particular homeless person has an appointment that day and they are instructed in the briefing to remind that person when they see them.

He said they make a real effort to get to know the homeless people common to their assigned area. He said they try learn why they are homeless, which services they are connected to or might need, and then try to get them to that service. He said it takes time, but they are there everyday and can do that work. He noted at least one situation where they were able to connect a person to drug treatment.

He said they leave the briefing and walk their routes covering the different zones. They asked to keep moving and not to congregate so they can cover more ground. They pick up trash from the night before and rouse people they find sleeping in doorways, encouraging them to move along so businesses can open. He said they generally do so when asked, particularly since they have a relationship with the ambassadors. If they are not responsive, they request help.

They do the same thing throughout the day when they find people on the sidewalk. He said the ambassadors are kind and usually get a good response when they ask them to move along and offer any help they might need. He said they engage panhandlers and encourage them not to violate the various city ordinances regarding where and how they can ask for money. If it continues to be an issue they call law enforcement. Beyond that, he said it is up to the community to determine what is allowed. 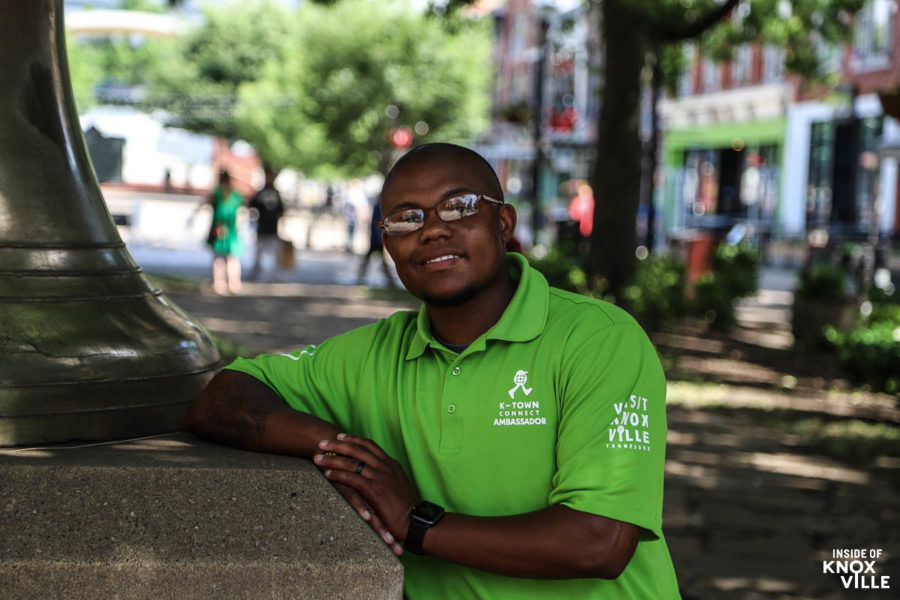 There are five areas covered, which they have termed Mission, Sub-Mission, Downtown, East of Hall of Fame, and World’s Fair Park. He said they do welfare checks, helping visitors, explaining how to access the Sunshpere, and so on. One person takes each zone and he says there is always trash and scooters to move off sidewalks. They do maintenance requests to the city. Mid-day they move toward the center as activity increases and hospitality and interacting with businesses becomes more of a focus. The direct people to restaurants and events.

He said hospitality services consume a majority of their time, though they will soon be more able to quantify that as they assemble statistics. They also do small things like open doors for visitors, watch for items that someone drops and getting it back to them, escorting groups from the convention center to Market Square, and more.

He encouraged downtown residents and others to introduce themselves and communicate any concerns. “If we don’t know, we can’t address it. The community has been supportive and I’m looking forward to seeing how the rest of the summer goes and how we might help.” They may be contacted through Visit Knoxville.