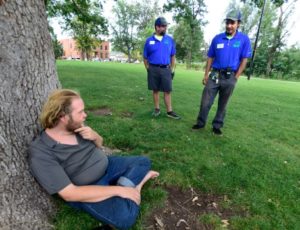 While walking through Boulder’s Central Park late Friday morning, Mario Chavez spoke with a person who requested that he check on a woman across the park.

She was spread out on a blanket, eyes closed, breathing slowly — but otherwise unresponsive.

Chavez walked over and spoke to her, but she didn’t open her eyes or answer him. He tried to wake her up. When she didn’t budge after several attempts, Chavez called for medical assistance. It was a hot day, he said, and the person was lying directly in the sun with a cold beer that indicated she’d been drinking.

In these instances, it’s better to play it safe than to end up sorry, Chavez noted.

Welfare checks are one of many duties of a downtown Boulder ambassador, a relatively new program of which Chavez is part that was created through a collaboration between the city and the Downtown Boulder Partnership.

When the new downtown ambassadors handle a situation like the one Friday morning, they create an incident report. This data goes to the city and is used, at least in part, to demonstrate how often the ambassadors were able to address a situation without making a call to the police.

The ambassadors program is one of several initiatives on which the Boulder City Council in April 2021 agreed to spend about $3 million over an 18-month period. Others include an urban park ranger program, a five-person internal team to clear encampments and a dedicated team within the Boulder Police Department for camping ban enforcement.

However, given newly established metrics and a list of goals the city acknowledges are aspirational, the first year or so of the pilot program has shown varied success.

According to data presented to the City Council on Thursday, in the time since the Council approved the various measures intended to help with enforcement of its urban camping ban, the city reports clearing 486 camping sites — 53 of which had propane tanks or fire rings — and removing 112 tons of debris and 5,100 needles.

But according to Boulder’s Director of Utilities Joe Taddeucci, the work is about more than the numbers. The efforts are not intended to end homelessness but instead to place a focus on safety, he added.

“It’s really about making the spaces safe for everyone, including the people who are attempting to camp in them,” he said.

Removing fire rings, propane tanks and needles accomplishes that, and it aligns with what the United States Interagency Council on Homelessness has determined to be best, Taddeucci said Thursday.

The long-term goals that have been identified for the pilot program include:

Regarding the data, Taddeucci noted that it’s a work in progress and that establishing metrics has been a significant undertaking. It’s not possible to draw absolute conclusions yet, he said. “At this point, we don’t know if it’s a seasonal thing … or whether we’ll see after a period of time that it’s a trend that’s continuing and concerning,” Taddeucci said.

In early 2022, for example, there was a brief decline in the number of encampment reports, but the numbers have risen significantly in April and May. In April, the number of reports neared 350 with that number jumping to closer to 400 in May.

Additionally, more unique individuals are reporting encampments to the city, which staff acknowledge could have more correlation with the increased communication to the public about where to report encampments than the actual number of encampments.

Ultimately, the initial findings left some City Council members wondering about the effectiveness of the various initiatives.

“My concern is really that despite picking up so much trash and doing so many cleanups, we’re kind of just trying to plug holes in a dam that seems to have more cracks every day,” Councilmember Nicole Speer said in Thursday’s meeting. “Rather than just clean up, I would really love for us to think about a strategy of harm reduction.”

“It really does not look to me like the data is favorable at this point,” Mayor Pro Tem Rachel Friend added.

Councilmember Matt Benjamin also questioned at what point the Council would have a chance to consider whether the pilot program has been effective and to determine what initiatives should continue.

To that point, City Manager Nuria Rivera-Vandermyde acknowledged that many of the initiatives were delayed for various reasons. The urban park rangers just began work, and the Police Department has hired only half of the officers the City Council approved last year.

Because of this, the city is likely to continue the program past the initial 18-month mark, which is approaching in October.

The ambassadors are one area the city has reported is successful, and Boulder is considering continuing the program indefinitely with continued support from the Downtown Boulder Partnership-managed Business District.

It got off the ground quickly and remains relatively well-staffed. There are currently 16 ambassadors, according to Operations Manager Brandon Lowe, though he said they could use more.

Since the pilot began, the team has performed more than 50,000 conversations with visitors, 10,000 local business check-ins and almost 3,000 welfare checks. They have picked up almost 8,000 bags of trash and cleaned up 4,500 instances of graffiti as well as biohazard waste from more than 100 humans and animals, the report notes.

Minutes before calling for medical assistance in Central Park, Chavez picked up trash from a downtown sidewalk.

Before that, he and coworker Bob Borchardt stopped into Active 88 Shoes as part of the regular business checks the ambassadors conduct.

The work of the downtown ambassadors is varied. Some days they’re helping set up for downtown events or providing maps and answering questions for visitors. Other days, they’re building relationships with Boulder’s unhoused residents and local downtown business owners.

“You are the Swiss Army knife of the downtown area,” Chavez said of the job. “You do everything.”

For Chavez and Borchardt, the work is personal, and it could be the reason they enjoy it and feel well-equipped to do it.

Borchardt is in recovery and was living on the streets of Denver some four years ago, and that certainly impacts his perspective.

When determining which camps to clear, the city teams go through a prioritization process. It’s not random, Taddeucci confirmed.

The cleanup schedule is determined by staff capacity and factors such as the life/safety risk; the proximity to schools, parks with playgrounds or public residences; the impact on neighborhoods; the size of the camp and whether there have been reports of crime or threats of violence tied to it.

To continue this work, Taddeucci said the city will bring forward a proposal during the budgeting process to expand the cleanup team by an additional four members.

In terms of policing, the Boulder Police Department — which has hired three of the six officers the Council supported last year — reports having issued 414 camping tickets between September 2021 and Aug. 1.

Further, according to its research, the department determined that there are concentrations of crime around the encampments.

Mayor Pro Tem Friend asked whether the city has any controls for its crime data, given that “if you’re policing something more, you’re going to find more crime,” Friend said.

Daniel Reinhard, with the Boulder Police Department, said he used encampments reported by residents as the baseline. These encampments are not immediately conveyed to the police department but to the public reclamation team. Because officers are at least initially unaware of the situation, it removes some of the potential bias, he added.

In the coming months, Boulder City Council will get its annual homelessness update and make some big decisions about its budget.

From Chavez’s perspective, ideas like the downtown ambassadors are a good start.

“I actually feel like I’m part of the solution,” he said. “What are we going to do? The answer is us.”