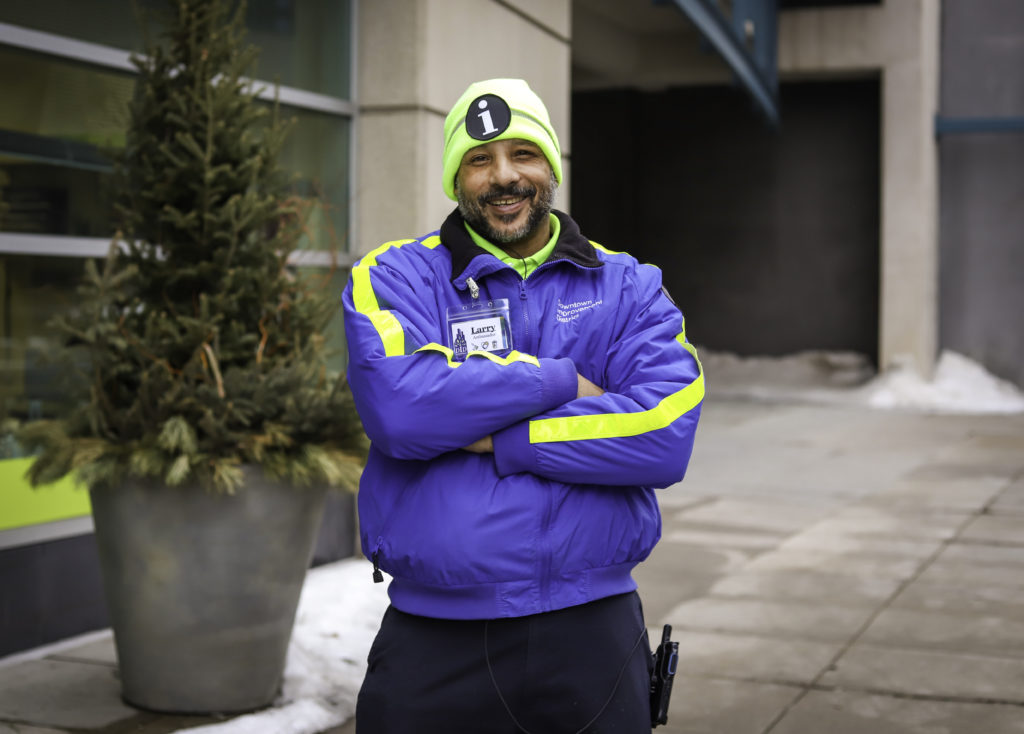 Imagine showing up to work on a day that feels just like any other but encountering one of the most prolific artists in history, who happens to notice your work. For starters, the odds of running into a large celebrity name in Downtown Minneapolis aren’t very great, and to be appreciated by one is even rarer. But that’s exactly the type of day Larry Williams experienced on January 21st of 2016.

On a Thursday, Larry arrived at the MDID/Block by Block (Minneapolis Downtown Improvement District) headquarters and got ready for his shift. He headed out with his fellow teammates to the streets of Downtown Minneapolis to greet residents and visitors and clean up the blocks. While he was hard at work, sweeping the area by the Dakoda Jazz Club, he was being noticed.

Later that day, the MDID Ambassadors were approached by none other than Prince himself. Throughout his success, he kept his hometown of Minneapolis close to his heart. He valued the work the Ambassadors were providing for the city, so he invited the workers to a private show at his home. Larry was a part of the small VIP list of Ambassadors who were welcomed to attend, but he was considering not going.

“I can’t go to it. I got nothing to wear, and I can’t afford to miss work,” Larry recalls saying.

That is when Anna Schmoll, current Regional Vice President but MDID Operations Manager at the time, stepped in to convince Larry to attend this once-in-a-lifetime opportunity.

“It was very short notice, and the performance was going to take place during the evening shifts, but when will anyone get an opportunity like this again?” Anna said. “I even offered to give rides to those who didn’t have one,” she added.

Anna, Larry, and several other Ambassadors waited at the back of the line until they were rushed to the front of the room to watch the performance. The private event only had 200 attendees, some of whom were the Ambassadors.

“It was just Prince playing the piano. No band or any other distractions,” Larry added about the experience. He revealed this to be one of his most memorable moments, and he was thankful Anna encouraged him to attend.

Eleven years later, Larry Williams still works as an MDID Ambassador at Block by Block. He tried many different roles, from cleaning to safety, and currently works as a Special Project Amabassador. Larry valued the compassionate and understanding nature of management. Beyond the encouragement to make memories, the current leadership team worked with Larry on his work schedule flexibility.

“I am a single father with two little kids. A two-year-old and a three-year-old,” Larry said.

He shared that due to the difficulties of finding child care, and his father’s stroke, he was granted a leave of absence by the management team to prioritize his family first. Larry is grateful to work among caring individuals.

“Not once did they question me about the time I needed off. They saw me as a person and understood my situation,” added Larry.

Employers play a crucial role in the job satisfaction of employees. It remains highly important to Block by Block to hire and promote managers who strive to create relationships with their employees. Whether it’s’ encouraging an employee to partake in an experience or being flexible and understanding, everything adds up to a fun and rewarding work environment.

“Everybody faces a challenge in their life, and building relationships with employees makes them more comfortable communicating that with us,” Anna commented.