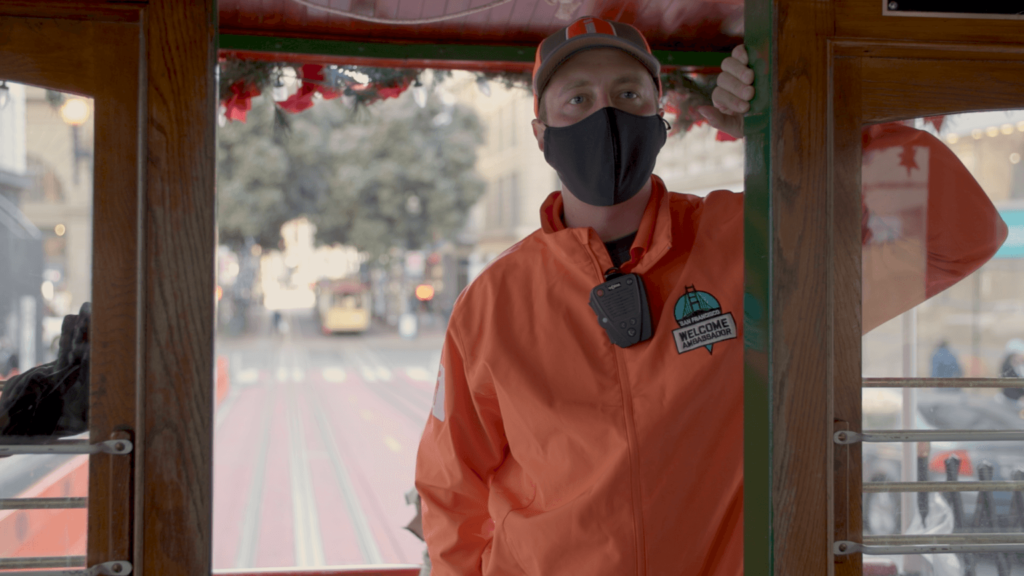 Written by Kevin Truong, The San Fransisco Standard
It wasn’t hard to spot the family of tourists ascending the Powell Street Station escalator. Luggage in tow and squeezed between a busker banging on a makeshift drum set and a speaker blasting Sade’s “Smooth Operator” the group stared at their phones quizzically as they emerged into the chaos of Market Street during the holidays.

Brian DeBellevue sprang into action. Decked out in a vivid orange jacket and baseball cap—and with a smile that’s hard to miss, even behind a mask—he looked a bit like a walking traffic cone.

After a quick greeting and a self-deprecating joke, DeBellevue pointed them to their Union Square hotel.

“You get a sense pretty quickly of the people who really need you,” DeBellevue said, miming a person buried in their smartphone map spinning around to figure out which way to walk. “Sometimes people are a little off put, but most of the time they’re really thankful to have someone help them out.”

DeBellevue is one of the roughly 50 Welcome Ambassadors that have been hired to act as the front door greeters for San Francisco. They are responsible for welcoming people to the city, offering directions, taking photos, answering questions and functioning as a concierge for both visitors and residents alike.

“The primary goal is to welcome people to the city, give information and help people feel comfortable and safe in San Francisco,” said Rena Leddy, vice president of Urban Place Consulting Group, which was enlisted to help design the program. It’s managed by Louisville, K.Y.-based Block by Block, which runs about 120 programs around the country.

Paulita Elliott, director of operations at Block by Block, said the San Francisco program was unique in that ambassadors here, rather than being limited to a single main tourist district, are often assigned to multiple locations and take public transportation to travel between their postings.

Click to see a day in the life of a Welcome Ambassador !

The program formally started in November and has conducted more than 230,000 public greetings.

The Welcome Ambassador program operates 7 days a week, between the hours of 8 a.m. and 8 p.m., with ambassadors posted in key tourist areas like Fisherman’s Wharf, Union Square and the Powell St. Cable Car Turnaround.

Some of the initial hiccups in its rollout have stemmed from the lack of reliable public transit and retaining workers unprepared for the hospitality role or the physical nature of the job.

“Being outside in the Bay weather and walking 10 to 13 miles is not always what they think it is,” Elliot said.

The program is just one of several efforts to encourage more visitors to downtown and other tourist attractions. Other initiatives include staffing tourist areas with police officers, another downtown ambassador program comprised of retired police officers, and beautification projects in and around Union Square.

Mayor London Breed has positioned the effort as part of the gradual recovery of San Francisco’s struggling tourism sector and a signal of safety to both residents and tourists.

Moanna Sauleaupepetele, who was one of the program’s first hires, said community members have started to recognize the ambassadors’ presence and have taken to calling her and her colleagues “the orange people.”

The welcome ambassadors are funded through a two-year $12.5 million grant from the Office of Economic and Workforce Development to the San Francisco Tourism Improvement District, which is responsible for supporting SF Travel, the city’s tourism agency.

The ambassador’s friendly presence aims to boost to a lagging tourism industry that has traditionally been one of the main drivers of the city’s economy. San Francisco’s hotel market has had the largest fall and the slowest recovery of any major metropolitan area in the U.S.

“San Francisco was one of the highest performing before the pandemic so it had farther to fall off,” said Emmy Hise, the CoStar Group’s director of hospitality analytics for the Western U.S. “They’ve seen a huge loss in international travel and a very heavy group travel presence that hasn’t come back.”

Those macroeconomic factors have been compounded by a national media narrative that has painted a city in crisis and struggling with an overdose epidemic and street crime. 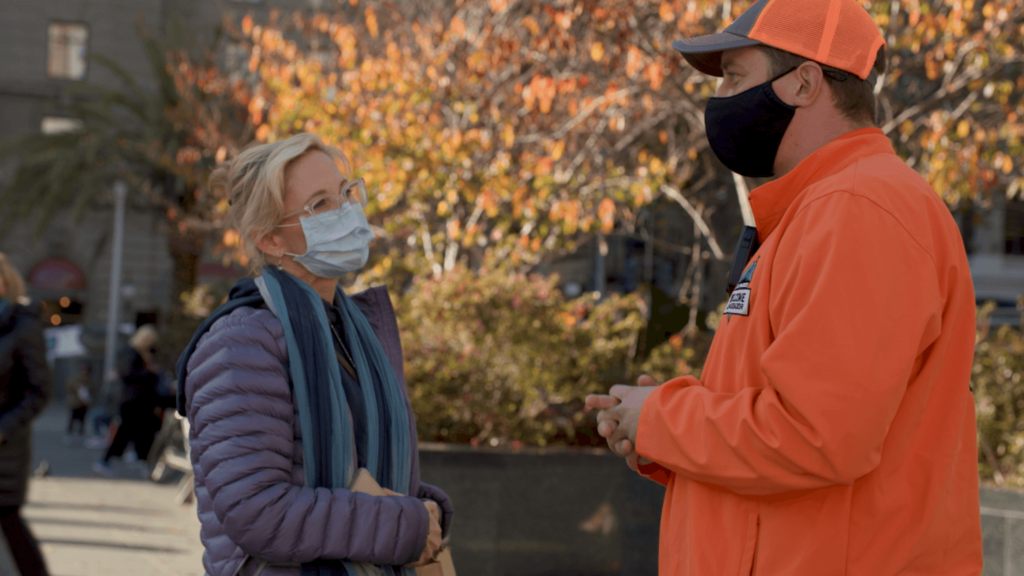 There was little evidence of that story at the Powell St. cable car turnaround on a recent Thursday morning.

The line for the city’s iconic cable cars included local tourists marveling at the relative lack of crowds downtown, long-haired Dutch headbangers in town for Metallica’s 40th anniversary concert and a visitor from India unfortunately named Kovid (“I had the name 55 years earlier,” he protested.)

Ardis Young, a Campbell resident on her first trip back to San Francisco since the pandemic, said her group was struck by the prevalence of ambassadors and street cleaning teams near tourist haunts. They provided a contrast to some of the stories around street conditions and rampant crime she and her friends had seen on the local news.

While the lack of crowds meant “a different experience,” she still relished the city’s ability “to unearth something new” and mentioned the Let’s Glow SF projection mapping display as a recent highlight.

DeBellevue worked the line like a seasoned pro, combining information about Muni’s smartphone app with bits of San Francisco trivia and teasing about this or that sports teams’ prospects.

“I like to catch people when they’re in line and get them laughing and having fun because it can get pretty defeating waiting an hour for something to go,” DeBellevue said.

The ambassadors are often confronted with the harsher realities faced by the city. On the walk between Powell Station and Union Square, DeBellevue hunched down to check on a man splayed out on a sidewalk vent.

“We do have a lot of interactions with the homeless population and we do welfare checks,” DeBellevue said. “Our job is to make sure everybody’s good, it’s not just about tourists, it’s like every person has value and is seen. Just because you’re on drugs or have whatever you got going on, it doesn’t mean you don’t have value or are not important.”

He recounted a recent experience he had helping a blind homeless man connect with services after he had received a housing voucher.

“He had this opportunity to get off the streets, so I helped him with that. I called 311, got him in touch with the correct channel and got him to the address,” DeBellevue said. “You have no idea the amount of joy that that brought him.”

Each ambassador is given an Android device used as a walkie-talkie and for data collection around community engagement. The smartphone is loaded with apps that show the schedule for tour buses and public transportation and translation software for communication with non-English speakers.

Ambassadors use their device to report data on their interactions with the public. The program’s leaders say these metrics and forthcoming surveys are key to understanding the impact of the ambassadors and measuring their success.

In his seven years in the city, DeBellevue has struggled with housing insecurity himself, relying on assistance from his mother and government relief to make ends meet. But the new role has provided him the rare opportunity to see the city anew.

“When people come here they realize even the movies don’t do it justice,” DeBellevue said. “When you see it with your own eyes, you’re like ‘wow, this place is incredible.’”