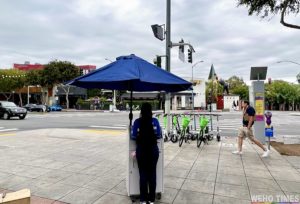 Originally posted by the City of Hollywood

The City of West Hollywood is pleased to announce staffed kiosks throughout the City to support the recent expansion of its Block by Block program. In recent weeks, the City launched three kiosks and it has recently added two more kiosk locations. Two additional locations are scheduled to be implemented within the next 30 days, which will bring the total number of kiosks citywide to seven. Concurrently, the Block by Block program has added personnel; there are now approximately 85 Security Ambassadors.

Kiosk locations are as follows in the City’s commercial districts:

In the City’s main public parks, kiosk locations are: