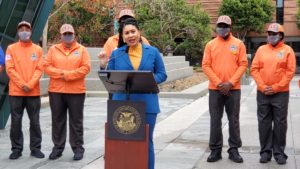 In total, the expansion will add up to 150 new ambassadors and attendants, which are expected to be a mix of Mid-Market/Tenderloin Safety Ambassadors, orange jacketed SF Welcome Ambassadors, BART service attendants, and SFPD Community Ambassadors, which are retired police officers that serve in a supportive role to offer an added layer of safety. The new Ambassador and attendant deployment will expand coverage in and around the Downtown area, including at BART and Muni Metro Stations and city operated parking garages, as well as in city neighborhoods, including the Mission.

As part of Mayor Breed’s plans to ramp up public safety efforts to aid the City’s economic recovery, ambassadors have already been deployed in the Mid-Market and Tenderloin, Downtown and tourist areas. Currently, the City has allocated funding for over 250 ambassadors.

The expansion will phase in as hiring and deployment allows, with the first ambassadors and transit station attendants expected to be deployed within the next six weeks.

“We are working every day to improve safety in this City,” said Mayor London Breed. “San Francisco has a significant police staffing shortage, so we need to be more creative in ways that deliver a positive and welcoming experience on our street and while also ensuring our sworn officers can do their jobs. By deploying more ambassadors and hiring more staff who can do support work for our officers out in the field, we can better respond to residents, workers, and visitors who want our city to be cleaner and safer.”

In addition to the expansion of ambassadors and attendants, the Mayor’s Plan calls for a significant expansion of SFPD Police Service Aides (PSAs), which are civilian positions that provide supportive duties to police officers, but do not hold peace officer powers such as carrying a firearm. PSAs allow sworn officers to focus on responding to calls for services, investigating crimes, and conducting community policing efforts like walking foot beats.

“The SFPD is committed to public safety. Our public safety commitment goes beyond enforcing laws and making arrests. It also means creative solutions that most effectively and efficiently reduce community harms while engaging with, and building relationships with, our diverse communities,” said Police Chief Bill Scott. “The ambassador program is a great example of how we have taken community input and collaborated with Mayor Breed to implement innovative, non-traditional policing solutions and strategies to enhance the safety of San Francisco and reduce community harms. While ambassadors are not meant to replace sworn police officers, they act as a force multiplier to enhance the safety, effectiveness, and efficiency of the sworn police resources we do have.”

The increased presence at BART and Muni Metro stations is a part of a long partnership between the City, SFMTA and BART, which includes the commitment in providing the safest ridership experience as riders make key transfers between the two system’s stations.

“These extra attendants will help welcome families, workers, tourists, and all types of riders as they arrive downtown,” said BART General Manager Bob Powers.“Having a dedicated attendant to welcome riders and chat with families while they wait for a train will boost our visible presence and enhance our team approach to connecting people in need with public services. More attendants will allow BART safety staff such as our police officers, Transit Ambassadors, and Crisis Intervention Specialist to focus on their work walking trains and stations responding to calls for service and the needs of vulnerable populations.”

“Like our regional transit partners and city agencies, safety is also our top priority and we look forward to this bold expansion of more community ambassadors and public safety presence deployed at some of the city’s most busy and visited areas,” said Jeffrey Tumlin, Director of Transportation. “This new expansion will enhance the public safety for all San Franciscans and visitors to feel safer while walking on our city’s streets, parking at our garages and traveling through the various shared Muni and BART transit platforms and stations.”

The San Francisco Department of Emergency Management will plan and coordinate activities and deployments of ambassadors. Deployments are expected to be dynamic based on need, pedestrian traffic, and community feedback. Ambassadors are part of a citywide network of resources focused on connecting people to services and promoting healthy street conditions. 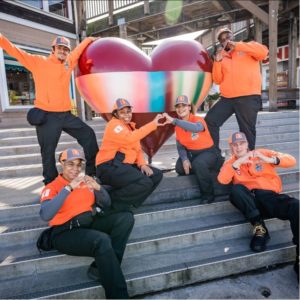 “Community ambassadors have demonstrated that they are helpful in keeping streets welcoming and accessible,” said Mary Ellen Carroll, Executive Director, San Francisco Department of Emergency Management. “San Francisco intends to utilize ambassadors in concert with public safety and street crisis resources to promote healthy and safe streets for all who live, work or visit our City.”

“We are excited to expand the ambassador program – vital in providing a visible presence and point of contact for people and visitors navigating our downtown and core, and in supporting our employees as they return to the office,” said Kate Sofis, Executive Director of the Office of Economic and Workforce Development. “As San Francisco’s shopping and dining scene picks up and with the many public activations coming online, we want people to have a warm and welcoming experience wherever they go in our beautiful city.”

These initiatives will help to benefit San Francisco’s economic recovery both by supporting Downtown and tourist areas, as well as the City’s neighborhood corridors.

“Visitors from around the country and the world are flocking to San Francisco’s amazing destinations, and this is yet another step the City is taking to welcome visitors to an enhanced experience in this incredible City,” said District 3 Supervisor Aaron Peskin,who represents the neighborhoods of Chinatown, North Beach, Fisherman’s Wharf and Downtown.

“District 6 residents have been demanding for more safety protocols and I applaud Mayor Breed’s decision to increase the presence of community and safety ambassadors during this unprecedented time of staffing shortages,” said District 6 Supervisor Matt Dorsey. “By bringing on these new ambassadors, the City’s police officers will be able to better respond to crimes and our high-traffic and frequently visited locations will have an added layer of public safety. I look forward to seeing the positive change these workers will bring to our communities and hope we can continue to hire more so that all of San Francisco’s neighborhoods can benefit.”

“San Francisco is experiencing a dire police staffing shortage at a time of increasing public concern about safety,” said District 8 Supervisor Rafael Mandelman. “It will take years to build back the police department need, but in the meantime the Mayor and her team are to be commended for finding creative ways to get more officers out into the field and more eyes on the street.”

“Conditions in the Mission have been unacceptable for quite some time. We have been working to restore a healthy atmosphere in the neighborhood while working hard not to further punish people for being poor,” said District 9 Supervisor Hillary Ronen. “Striking this right balance isn’t always easy. I believe community ambassadors will help us accomplish both goals and am so excited we will shortly have dozens of ambassadors walking the streets to help people feel safe and restore some vibrancy to the neighborhood.”

“I support the investment in creative and innovative ways to keep communities safe and better served, such as the Community Ambassadors and Police Service Aides. They can provide merchants and the public the sense of safety and welcoming environment that will support community and economic activities that this season brings. Our neighborhood commercial corridors in District 7 need this kind of support as they recover from the last couple of years,” said District 7 Supervisor Myrna Melgar.

“Here in the heart of the city, Union Square, we understand that there are many pieces of the puzzle when it comes to ensuring a successful recovery, post COVID,” said Marisa Rodriguez, Executive Director of the Union Square Alliance. “The Mayor’s efforts to support the Tourism Ambassadors, Police Ambassadors, and Urban Alchemy serve San Francisco’s collective goal to create a healthy and safe downtown for everyone to enjoy, which in turn will allow our entire city to thrive for years to come.  We are better when we work together.”